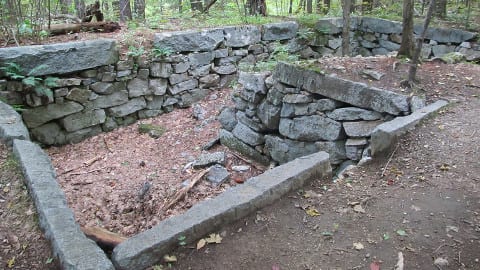 Among other early visitors to Red Hill who left written records was Timothy Dwight, President of Yale from 1795-1817. He traveled widely throughout New England, and in September, 1817 rode horseback to the summit of “Red Mountain”, where he found “a prospect worth not only the trouble of the ascent, but of our whole journey.” Monadnock was visible 70 miles away, “like a blue cloud in the skirt of the horizon.”

Another source points to a British Admiral Warren who fought the French and had the hill named in his honor at one time. It is called “Red Mountain” on the map done by Jeremy Belknap in 1791. All sources assert that the redness of the hill in autumn is the source of the current name, whether it is produced by the red oak leaves, blueberries, or by bearberries, as stated in Sweetser’s White Mountain Guide of 1918.

The Center Harbor Historical Society has the “Red Mountain Album” in which members of the Cook family, who lived in the saddle between the two summits for many years, recorded the visitors to their hilltop between 1833 and the 1860s. One notable visitor on July 9, 1835, was Franklin Pierce, in later years the President of the United States. Frank Greene has written an extensive essay on the history of the Cook family of Red Hill, which is available at the Moultonboro Library, for those who wish to read more of this family, who guided visitors to the summit and provided hospitality, including blueberries and milk in season. Jonathan Cook was a Revolutionary War veteran. A drawing in the logbook by a German visitor in 1851 is our only visual reference to the Cook farm buildings, but the cellar holes are still plainly visible if hikers wish to take the route up to the “saddle” between the two summits to see the site of the farm which supported three generations of the Cook family. Where there is now but a footpath, there was once a road sufficient for wagons to reach the farm, carrying visitors on the way to the celebrated viewpoint.

The other cellar holes which are seen on the trail to the fire tower belonged to the Ebenezer Horne family, built in 1828. Eben is said to have been a great natural mathematician, able to do complicated problems in his head despite a lack of formal education. His children and those of the Cook family attended a school near the Sibley Farm on Red Hill Road, and Charles Horne was envied by his schoolmates because in the winter he could sled from home to the schoolhouse door.

Henry David Thoreau also climbed the peak on July 5, 1858, where he boiled water for tea, having carried it up the last half-mile, and enjoyed the view of “Winnipiseogee” and its islands, Squam, and Chocorua and the Sandwich Mountains, which seemed “The boundary of civilization on that side, as indeed they are.” We note that he saw on the Ossipees, “smooth pastures around the base or extending partway up”, evidence of the farms that once existed on that now entirely wooded slope. The Sandwich Historical Society has published the narrative of John G. Cook, a Cook family relative from Maine, who visited Red Hill on June 18, 1850, borrowing a spy glass from the hotel in Moultonboro, with which the party observed the steamer “Lady of the lake” coming into port in Center Harbor. Another visitor was Samuel Adams Drake, who mentions his visit, sometime after the Civil War, in “The Heart of the White Mountains”, published in 1882. There are paragraphs of florid descriptions of the views in many of the old guide books, which are most interesting to read, but space does not permit quoting from them.

Thoreau’s visit inspired at least one of his readers, Elliott S. Allison, who climbed Red Hill after reading Thoreau’s account, and found the hill to possess “an individuality and charm which I could not forget.” Hence, following World War II service, he became the watchman at the fire tower from 1946-1953, along with his wife, who arrived from England just prior to their first summer on the job. In an article published in “Appalachia” he wrote of indigo buntings, ospreys, bald eagles, chestnut-sided warblers and solitary vireos, plus myrtle warblers which hopped up the steps and into the cab of the fire tower, a gray tree frog which was seen 25 feet up the tower, blending in perfectly with the steel of the railing, and a fox which sniffed the groceries they were carrying up the hill one day when they met him on the trail. The natural beauty of the hill also appealed to Thomas Francis Sheridan, after whom Sheridan Road was named. He wrote a pamphlet in 1912 entitled “Red Hill Wanderings” in which he mentions the brilliant blue fringed gentian, a decidedly rare wildflower, at least currently.

William Henry Bartlett, 1809-1854, was a British landscape artist whose prints of scenic views in New England are still popular collector’s items today. His book of “American Scenery”, published in 1840, included “Lake Winnipiseogee, From Red Hill”, which he must have visited in order to make the drawings for the finished illustration. He also drew the sawmill at the foot of Kanasatka, and a view of Meredith.

The fire tower on Red Hill replaced of an earlier wooden tower which stood on Mt. Israel in Sandwich from 1912 to 1925. Ernest B. Dane, a well-known summer resident of Center Harbor, offered to build a steel tower on Red Hill if the state would maintain it, and he paid the state the sum of $1,175.00 for the building of tower, cabin, and phone line, the steel being provided by the NH Structural Steel Company of Manchester. It was originally 27 feet high, raised to 37 feet in 1972 with a lookout platform below the enclosed cab. The state closed the tower in 1981, and the summit property reverted to the Dane family. It was eventually leased to the town of Moultonboro so that Lakes Region Mutual Aid could continue to operate the tower, and it has been manned by Ed Maheux of the Moultonboro Fire Department for over 20 years. The tower was placed on the National Historic Lookout Register in 2003.The Lakes Region Conservation Trust bought the summit property in 2001, and also preserves 2,748 acres on the hill by deed or easement, thus maintaining the area for hikers and for the moose, bear, deer, and birds that call it home.