As recently as mid-December 2020, our juvenile loon and other transient, migrating loons, were still enjoying open water on Kanasatka. The adult loons had migrated weeks earlier, and, as Nature designed, the juvenile was left to figure it out. Nature’s expectation was the juvenile loon would join other loons that had landed on Kanasatka for a rest. All would soon migrate out for the winter! As weather got colder within another week, the lake was quickly freezing and our juvenile loon was alone and restricted to a small ice-free area. Although some unsuccessful attempts at flying were observed, it appeared the open water was too small for a successful loon takeoff. So on Saturday December 18, John Cooley,

biologist from the Loon Preservation Committee (LPC), was called for help.

Mark Whary and Kevin Kelly attempted to assist John Cooley in the ice rescue. We stood on the shore with a finger on 911! John had worked out the technique of getting to the loon’s vicinity using an aluminum boat, safety ropes, rubber suit, large tarp, large net and personal grit! Several hours went by without success. So we reconvened on Sunday when John was successful. John rescued 4 loons and helped relay a fifth that weekend!

The Kanasatka loon appeared healthy based on vigorous refusal to be netted. Once caught, the body condition was good and weighed a robust 4.5 kg. The plan was to hold the loon long enough to band it, get a closer look at its health, get some blood for routine measurements and then release it on the ocean. Because the loon hadn’t migrated, there was concern over underlying medical issues. A chest X-ray the next day revealed a thickened air sac lining, highly suggestive of aspergillosis. This is a respiratory infection caused by the fungus Aspergillus,which is ubiquitous in the environment. It is common as a secondary infection in compromised juvenile and adult loons, and has a poor prognosis. Blood sampling ruled out lead intoxication and a limited set of common blood values were acceptable. But given the likely diagnosis of untreatable aspergillosis, the difficult decision was made to euthanize the loon.

Necropsy indicated the juvenile was a male and in general good body condition. Grossly observable lesions were limited to the air sacs and lungs. There were plaques on mucosal membranes and the lungs were heavy with pink fluid (inflammatory pneumonia). Culture of the air sac lining was positive for Escherichia coli. E. coli bacteria could be seen in blood vessels, indicating a blood infection or septicemia. Aspergillosis organisms could be seen histologically in granulomas. These are the body’s scar response to an infection it can’t readily eliminate; essentially a walled-off nidus of infection. Typical of an organism that can’t be readily killed by the immune system, a granuloma response keeps the infection localized, preventing spread. At least that’s the idea.

Aspergillosis lesions, like granulomas, are chronic in nature. They develop over the time-course of weeks and can persist for months unless other issues cause health decline. In contrast, E. coli infections are acute, developing within days. If an E. coli infection progresses to septicemia, death would be likely within days.

So the provisional diagnosis is aspergillosis complicated by E. coli sepsis. Add the likely contribution of stress. We also consider other factors yet to be ruled out.    The lake had a cyanobacteria bloom late summer into the fall and related algae toxins may have been released into the water. Some of these toxins are neurotoxins and could have impacted general health and potentially, migration. The brain did not have observable lesions and no behavioral changes were noted. Related samples have been collected but results of cyanobacteria testing will not be available until later this winter or spring. E. coli inhabits the intestinal tract in most animals and infections in the gut and other tissue sites are common. But we also are concerned about lake water quality, particularly because the cyanobacteria bloom and E. coli contamination can result from the same factors of high temperature, drought that lowers lake levels, excess nutrients such as phosphorous or septic contamination. The potential interaction between cyanobacteria and E. coli has yet to be examined closely and may offer the LPC funding opportunities for screening more loons as they are banded or rescued.

In addition to all the Kanasatka loon watchers, these results are due to the combined efforts of John Cooley, Tiffany Grade and Caroline Hughes of the LPC, Dr. Mark Pokras from Tufts, Drs. David Needle and Inga Sidor from the UNH Diagnostic Lab, a local veterinary practice in Concord and Maria Colby, a wildlife rehabilitator. It takes a village! 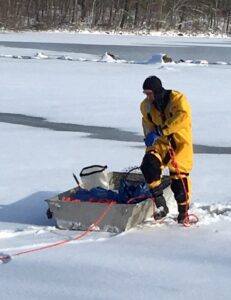 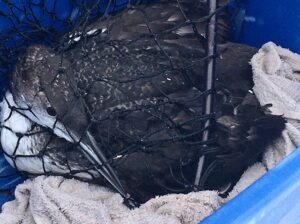