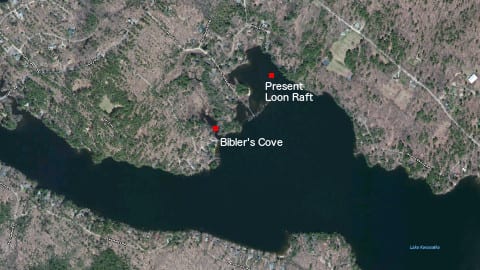 by George and Virginia Bibler

We built our cabin on Coe Point in 1973.  Prior months of clearing by hand had yielded an open, fairly flat area overlooking a marsh leading onto the lake.   We would have canoe access to the lake and a nice view of the Red Hill fire tower.  I had spent many summers as a youngster at my grandfather’s cottage in northern Indiana, boating and fishing on Lake Dewart.  This was a dream come true for us, to have a camp near a lake.

The wildlife is abundant in around Lake Kanasatka and in the byways feeding the lake. In this marsh, quiet observation opens up a world of abundance: snapping turtles belly to belly rolling over in a mating dance in the water; the Great Blue Heron spearing frogs, catfish and snakes; an otter family playfully climbing onto exposed rocks; muskrat and beaver, deer and bear; and, dozens of different kinds of birds. A rare species of water marigold has been catalogued by the N.American Wildflower Society.

The marsh became especially important to Lake Kanasatka in the summer of 1979. Arriving on a weekend Friday eve, while having the traditional spagetti feed, we looked across the marsh to see two huge black and white birds at the edge of a clump of grass. They were pulling up bits of marsh grasses to pile onto the clump. It looked like a nest was forming. Could those be loons…? Calling around to the local Fish and Game Officer, Dave Nelson, we were put in touch with Rawson Wood of the N.H. Audobon Society and LPC.

The next week we arrived at camp to find a completed nest. A week later, 2 large oval eggs on this nest. And on the third week back, an empty nest! The Director of the Loon Preservation Committee arrived, Scott Sutcliff, who went out across the marsh and found eggshell fragments dragged away in the back of the nest toward the shore opposite. Raccoons had predated the nest. This was the first attempt at nesting on Kanasatka known to the LPC. This turned out to be the beginning of many years of loon chicks on our lake.

When the LPC was formed in 1975, much group effort went into the building and deployment of floating nesting platforms. These would serve to remove the loon from raccoons and accommodate changing water levels. They could be marked to keep boaters away. Over many seasons, these floating signs marked the edge of Coe Point. A platform of dried cedar logs had been built on the lake prior to 1979 and was placed off Bishop Shores.

Over several years it had not been used by the birds.  So Scott Sutcliff pulled it up the lake to the Coe Point Marsh and placed it about 100 yards in from the lake.  In early summer, this raft could be approached by the loons swimming completely under water.

In 1980, 2 loon chicks hatched from this floating nest.  The raft would be used six times in the period 1980 to 1995, produced eight (8) chicks.  Tussocks in the marsh itself would provide land nest sites five other times in the period.  In total, fourteen (14) loon chicks were hatched in the Coe Point marsh.

We are proud to have been associated with the LPC in the early days.  Many neighbors on the point helped in spotting and in sharing information on loon happenings.  With the annual census efforts, many other lake owners came to learn about and to help with these magnificent creatures.  We met with and worked with the first leaders in the N.H. loon recovery efforts on the lake: Rawson Wood of the N.H. Audubon Society, Dave Nelson of Fish & Game, Scott Sutcliff first LPC Director and Jeffrey Fair, LPC’s second Director. Our “wildlife sanctuary” became an important breeding ground for Lake Kanasatka loons.

For more information on the History of Loon Nesting on Lake Kanasatka from 1975 to Present, take a look at the Nesting Data Chart on the Loon Nesting page.