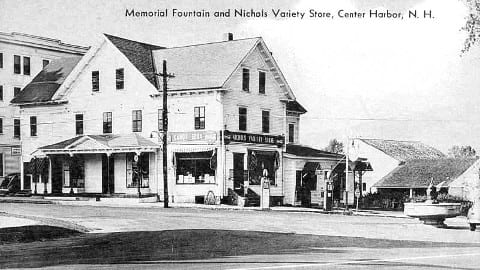 Nichols Variety Store in the early 50’s.  The attached building wing on the right was the Center Harbor Post Office.  After the Post Office moved, the wing became the greeting card and magazine section for Nichols.  Today Harbor Scoops occupies the wing.  The building to the extreme left, an empty field today, was the Garnet Inn Annex.

Nichols Variety Store was were you could go to get a drink from a real soda fountain, by a comic book or greeting card, get your TV tubes checked, buy penny candy,  find a souvenir  for friends back home,  pick out an ice cream “rocket cone” from the freezer, fill your car up with gas, or just pick up the daily paper.  They had a sign that read “If you don’t see it just ask, we probably have it somewhere in the store”.  Between Nichols and Heath’s “Dealer in Most Everything” you could get almost anything you wanted.

by Barbara Lauterwasser
Several summers ago a few long-time Kanasatka summer residents (Lee Sharp Hart, Retie Sharp Johnson, Elinor Jenkins Charles, Lynn Jenkins Youtz, Ted and Helen Hilton, Barbara Bates Lauterwasser and Herb Lauterwasser) met at the Hilton’s Deer Hill Camp to reminisce about what fun it was to summer on Kanasatka starting in the 1920’s. We filled both sides of a cassette tape remember when.

In conclusion, it seems as though Kanasatka and the surrounding area has a special draw for quite a few of the original campers of the early days. Full-time residents on the lake now include Ruth and Marjorie Ramage, Hal Richards and son Chip, and in nearby Laconia, Lee and Dave Hart and Barbara and Herb Lauterwasser. Fourth generation members are visibly present throughout the summer.